This legislative update summarizes those bills effective on and after September 1, 2005 that we consider of interest to our clients. The first legislative update, dated July 13, 2005, summarized those bills effective immediately that we consider of interest to our clients. The second legislative update, dated July 19, 2005, summarized House Bill 2438 relating to changes in manufactured housing law, which took effect June 18, 2005. The third legislative update, dated August 15, 2005, summarized Senate Bill 1587 and House Bill 2491 relating to the transfer and refinance of real property tax liens. The fourth legislative update, dated August 18, 2005, discussed House Bill 1547 and the Finance Commission proposed rules relating to the new second lien plain language Spanish disclosure. The legislative update that follows this update will summarize the two proposed constitutional amendments (SJR 7 and SJR 21) to be submitted for voter approval at an election to be held November 8, 2005. 1. Second Lien Loan Spanish Language Disclosure (HB 1547): This bill amends the plain language provisions of Section 341.502 of the Finance Code to provide for a Spanish language disclosure by adding subsection (a-1) as follows: (a-1) If the terms of the agreement for a loan under [Chapter 342 or a Chapter 342 home equity loan] were negotiated in Spanish, a copy of a summary of those terms and other pertinent information shall be provided to the debtor in Spanish in a form identical to disclosures required for a closed-end transaction under 12 C.F.R. Section 226.18 [Regulation Z]. Note: These plain language requirements only apply to a loan accruing interest at a per annum rate over 10% that is secured by an inferior lien on residential real property. The Finance Commission has proposed rules to implement this disclosure requirement, which are published in 7 T.A.C. §§1.1251-1.1256. Until these rules are final, the Office of Consumer Credit Commissioner has stated that compliance with the proposed rules will be deemed compliance with this new statutory requirement. We have prepared a separate memorandum on Section 341.502(a-1) and the proposed rules, dated August 18, 2005, which is on our website. A complete copy of the proposed rules and model Spanish language disclosure form is included in that memorandum. 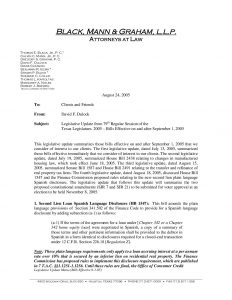