On April 18, 2012, the CFPB released the above referenced Bulletin notifying entities under CFBP supervision that the CFPB is reaffirming its commitment to enforcing the ECOA and Regulation B, especially in the area of disparate impact discrimination, also known as the “disparate impact doctrine.” In an accompanying press release, CFPB Director Richard Cordray is quoted as saying, “We want consumers to avoid the marketplace’s silent pickpocket-discrimination. We cannot afford to tolerate practices, intentional or not, that unlawfully price out or cut off segments of the population from the credit markets.” Regulation B, which implements the provisions of the ECOA, provides the following explanation of the disparate impact doctrine, commonly known as the “effects test,” in comment 6(a)-2 to section 1002.6 (12 CFR §1002.6): Effects test. … The Act and regulation [ECOA and Regulation B] may prohibit a creditor practice that is discriminatory in effect because it has a disproportionately negative impact on a prohibited basis, even though the creditor has no intent to discriminate and the practice appears neutral on its face, unless the creditor practice meets a legitimate business need that cannot reasonably be achieved as well by means that are less disparate in their impact. For example, requiring that applicants have income in excess of a certain amount to qualify for an overdraft line of credit could mean that women and minority applicants will be rejected at a higher rate than men and nonminority applicants. If there is a demonstrable relationship between the income requirement and creditworthiness for the level of credit involved, however, use of the income standard would likely be permissible. The Bulletin states that the CFPB, in exercising its supervisory and enforcement authority, will consider evidence of the disparate impact doctrine as one method of proving lending discrimination under the ECOA and Regulation B. This memorandum only provides a brief explanation of the Bulletin, and you are advised to read the Bulletin in full to determine its applicability to your lending practices. The Bulletin may be found at the following web address: http://www.consumerfinance.gov/f/201404_cfpb_bulletin_lending_discrimination.pdf. 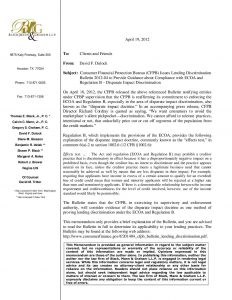