The United States Department of Veterans Affairs (VA) has posted on its website at http://www.benefits.va.gov/homeloans/docs/loan_limits_august_2012.pdf a notice of change in the VA maximum guaranty limits for August 6, 2012 to December 31, 2012. For you convenience, we have reprinted the text of this notice below: Maximum Guaranty Limits for August 6, 2012 to December 31, 2012 The Honoring America’s Veterans and Caring for Camp Lejeune Families Act of 2012 has been signed into law. The Act includes a number of changes to the Department of Veterans Affairs’ (VA) Loan Guaranty program, including reverting back to the previous method of calculating maximum guaranty. This resulted in some loan limits increasing. While VA does not have a maximum loan amount, the following county “limits” must be used to calculate VA’s maximum guaranty amount for a particular county. These limits apply to all loans closed August 6, 2012 through December 31, 2012. 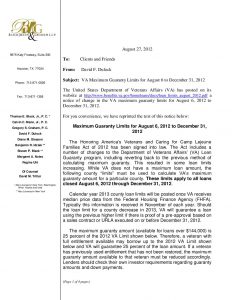