The Federal Reserve Board published the following press release yesterday regarding potential mortgage foreclosure irregularities by four mortgage servicers: The Federal Reserve Board on Tuesday announced that borrowers who believe they were financially harmed during the mortgage foreclosure process by four institutions in 2009 and 2010 can now request an independent review and potentially receive compensation. Four large mortgage servicers supervised by the Board [names deleted] are required to conduct this program as part of their compliance with enforcement actions issued by the Board in April 2011. Under these actions, servicers are required to compensate borrowers for financial injury resulting from deficiencies in their foreclosure processes. A number of servicers supervised by the Office of the Comptroller of the Currency must also conduct the program. As mandated by the Federal Reserve’s enforcement actions, the four servicers were required to retain independent consultants approved by the Federal Reserve to conduct the reviews. Borrowers are eligible for a review if their primary residence was in the foreclosure process in 2009 or 2010, whether or not the foreclosure was completed. The review is intended to determine if those borrowers suffered financial harm directly resulting from errors, misrepresentations, or other deficiencies. The Federal Reserve will monitor the implementation of the program and the servicers’ outreach efforts. To apply for a review, individuals may call 888-952-9105, Monday through Friday from 8 a.m. to 10 p.m. (ET), and Saturday from 8 a.m. to 5 p.m. (ET). Individuals can get more information about the review through a website set up by the servicers [website deleted]. In addition, the servicers will conduct an advertising campaign and send letters to borrowers who may be eligible to participate in the review to provide information. Requests for review by the servicers’ independent consultants must be received by April 30, 2012. Borrowers are encouraged to carefully consider the information about the review program to determine if they should participate. There are no costs associated with being included in the review. In addition to conducting the reviews generated by this outreach program, the independent consultants retained by the servicers supervised by the Federal Reserve will separately review all cases in certain categories of foreclosure actions by the servicers to determine whether borrowers suffered financial injury. These categories include members of the military who were in the mortgage foreclosure process in 2009 or 2010 who were covered by the Servicemembers Civil Relief Act and borrowers who had previously filed complaints with the servicers about foreclosure actions that were pending during 2009 or 2010. Borrowers who previously filed complaints with these servicers about foreclosures pending during the review period also may seek independent reviews of their foreclosures. The enforcement actions issued by the Federal Reserve in April also require the servicers to correct other deficiencies in residential mortgage loan servicing and foreclosure practices going forward. Under the plans, among other things, servicers must specify a single point of contact for certain borrowers who are having difficulty paying their mortgages, ensure that foreclosures are not pursued when a borrower is performing on a loan modification, and establish robust controls and oversight over their third-party vendors. As previously stated in April, the Federal Reserve believes monetary sanctions in these cases are appropriate and plans to announce monetary penalties. These monetary penalties will be in addition to the compensation provided to borrowers in the independent review process. 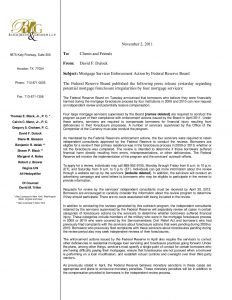