Recently we were asked by a client if the invalidation of the March 24, 2010 U.S. Department of Labor Administrator’s Interpretation No. 2010-1 (AI 2010-1) by the District of Columbia Circuit Court of Appeals’ July 2, 2013 decision in Mortgage Bankers Assoc. v. Harris, 720 F.3d 966 (D.C. Cir., 2013), cert. granted, 134 S.Ct. 2820 (U.S. Jun 16, 2014), herein the “Harris decision,” allows employers to re-classify their mortgage loan officers (MLO) as administrative employees exempt from overtime requirements under the Fair Labor Standards Act (FLSA). Our recommendation is that employers should not re-classify MLO employees as exempt administrative employees based on the Harris decision, for the following reasons: 1. The Harris decision vacated AI 2010-1 on procedural grounds and did not address the merits of AI 2010-1. The DOL did not follow the federal Administrative Procedures Act (APA) notice and comment rulemaking requirements in issuing AI 2010-1, so the court remanded the case to the district court with instructions to vacate AI 2010-1, stating: “[W]e reverse the District Court order dismissing MBA’s Motion for Summary Judgment and remand the case with instructions to vacate the 2010 Administrator Interpretation significantly revising the agency’s 2006 Opinion Letter. If the Department of Labor (‘DOL’) wishes to readopt the later-in-time interpretation, it is free to. We take no position on the merits of their interpretation. DOL must, however, conduct the required notice and comment rulemaking.” (Harris, 720 F.3d at 968.) 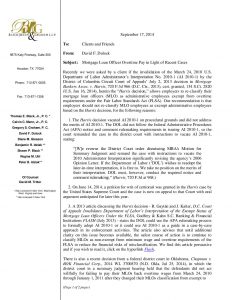