In the August 26, 2014, Federal Register (79 FR 50835), the Federal Housing Administration (FHA) published a final rule (click here) that effective for FHA-insured mortgages closing on or after January 21, 2015, revises FHA’s regulations to prohibit an FHA approved mortgagee from charging the mortgagor interest through the end of the month in which the mortgage is being prepaid, allowing them instead to charge interest only through the date the mortgage is prepaid, and prohibits the charging of interest beyond that date. This change to FHA prepayment regulations is in response to the Ability-to-Repay and Qualified Mortgage regulations (ATR/QM Rule) that became effective January 10, 2014. The ATR/QM Rule defines “prepayment penalty” in closed-end transactions as “a charge imposed for paying all or part of the transaction’s principal before the date on which the principal is due.” The ATR/QM Rule specifically excludes a post-payment interest charge currently allowed by FHA regulations as a prepayment penalty for FHA loans closed before January 21, 2015. For FHA loans closed on or after January 21, 2015, a post-payment interest charge will be considered a prepayment penalty by the ATR/QM Rule, thus making it necessary for FHA to amend its regulations. 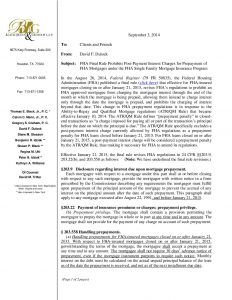