Over the last several years we have periodically updated our clients on the status of the Federal Communications Commission’s rules on unsolicited facsimile advertisements (see memos dated August 18, 2003 (updated October 18, 2004 and June 28, 2005) and July 5, 2005). On April 5, 2006, in its Report and Order and Third Order on Reconsideration (“Order”), the Commission adopted its final rules regarding unsolicited facsimile advertisements. These rules became effective August 1, 2006, and implement the Telephone Protection Act of 1991 (Public Law No. 102-243) and the Junk Fax Prevention Act of 2005 (Public Law No. 109-21), codified at 47 U.S.C. §227. This memorandum is a summarized redaction of the summary of the Commission’s Order published in the May 3, 2006 issue of the Federal Register (Volume 71, Number 85, pages 25967-25979). For the purposes of clarity, we have rearranged some of the material published in the Federal Register. This memorandum only concerns facsimile transmissions of unsolicited advertisements as addressed in the Order. Advertising by other means, such as by telephone call solicitation or email, are not addressed in this memorandum. The Order amends the Commission’s rules on unsolicited facsimile advertisements as required by the Junk Fax Prevention Act of 2005. In compliance with the requirements of that Act, the Commission amended its rules in 47 C.F.R. §64.1200 to expressly recognize an Established Business Relationship (EBR) exemption from the prohibition on sending unsolicited facsimile advertisements. (Facsimile senders will now be permitted to send facsimile advertisements to recipients with whom they have an EBR without first securing the recipient’s written permission.) Should a question arise, however, as to the validity of an EBR, the burden will be on the sender to show that it has a valid EBR with the recipient. 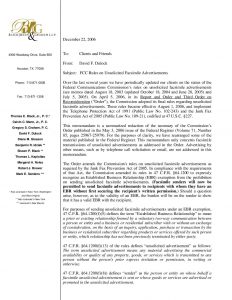