Our November 21, 2014 memorandum is hereby revised to reflect that the Agencies (as defined below) published the Final Rule in the December 24, 2014 Federal Register (79 FR 77602) On October 22, 2014, the Office of the Comptroller of the Currency, the Board of Governors of the Federal Reserve System, the Federal Deposit Insurance Corporation, the Securities and Exchange Commission (“SEC”), and, with respect to residential mortgage assets, the Federal Housing Finance Agency (“FHFA”) and the Department of Housing and Urban Development, (collectively, the “Agencies”) issued a joint final rule (the “Final Rule”) that implements the credit risk retention requirements of section 15G of the Securities Exchange Act of 1934 (the “Exchange Act”), as added by section 941 of the Dodd-Frank Act, Public Law 111-203. The rule was initially proposed in April 2011, and re-proposed in September 2013 with significant modifications based on industry and public comments. The Final Rule largely tracks the language of the re-proposed rule, with the exception of the cash flow restrictions, which the Agencies did not adopt. The Final Rule (i) requires a sponsor of asset-backed securities (“ABS”) to retain a minimum of 5 percent of the credit risk of the assets collateralizing the asset-backed securities and (ii) prohibits the sponsor from directly or indirectly hedging or transferring that risk. The Final Rule includes a variety of exemptions from these requirements, including an exemption for asset-backed securities that are collateralized exclusively by “qualified residential mortgages” (“QRMs”). The definition of QRMs in the Final Rule is expressly aligned with the “qualified mortgage” (“QM”) definition found in the Consumer Financial Protection Bureau’s (“CFPB”) Ability to Repay Rule. The Final Rule also exempts certain “community-focused residential mortgages” that are not eligible for QRM status because of the exemption they receive under the Ability to Repay Rule. 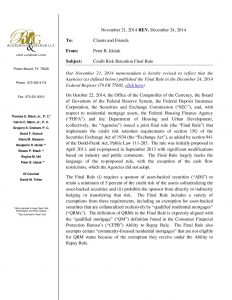