Corrections and Amendments to Regulation X – GFE and HUD-1

In the July 11, 2011 Federal Register, the Department of Housing and Urban Development (HUD) published a final rule (“July 2011 rule”) that makes technical corrections and clarifying amendments to HUD’s Regulation X final rule that became effective on January 1, 2010 (“January 2010 rule”). The effective date of the July 2011 rule is August 10, 2011. This memorandum addresses the July 2011 rule only as it relates to the Good Faith Estimate (GFE) and HUD-1/1A Settlement Statements. As to the other corrections and amendments made by the July 2011 rule, they are more in the nature of technical corrections and are not addressed in this memorandum. In regard to the GFE and HUD-1/1A, the July 2011 rule makes changes summarized as follows: 1. It amends Section 3500.7(a)(4) and (b)(4) of Regulation X by adding the requirement that additional fees may not be charged until after the applicant has indicated an intention to proceed with the loan. 2. It amends the Appendix A Instructions for Page 3 of the HUD-1 to provide that the estimated charge disclosed on the GFE for a settlement service that is not provided must not be included in the comparison chart on Page 3 of the HUD-1. 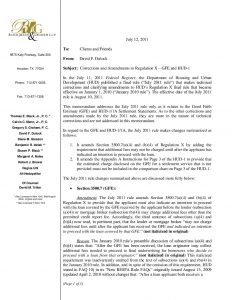