In a press release dated August 7, 2012, the Consumer Financial Protection Bureau (CFPB) provided notification that it has updated its international money transfer rule issued February 7, 2012, (February Rule) to make the transfer process easier for institutions that handle 100 or fewer remittances a year. The updated rule the subject of the above press release (Updated Final Rule) clarifies the process for community banks, credit unions, and other financial institutions. According to CFPB Director Richard Cordray, the Updated Final Rule will make “the process easier for community banks, credit unions, and other small providers that do not send many remittance transfers.” Below is a redacted version of the CFPB’s press release: The February Rule will take effect Feb. 7, 2013, and implements new protections under the Dodd-Frank Act that require remittance transfer providers to disclose fees upfront, as well as the exchange rate and the amount to be received by the recipient. Disclosures must generally be provided when the consumer first requests a transfer and again when payment is made. The February Rule also provides consumers with error resolution and cancellation rights. When the February Rule was released, the CFPB also published a Notice of Proposed Rulemaking seeking comment on whether to provide additional safe harbors and flexibility in applying the February Rule in certain situations. The CFPB has now received those comments and has finalized the Updated Final Rule, which will also take effect on Feb. 7, 2013. 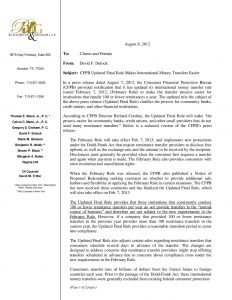