On August 15, 2013, the Consumer Financial Protection Bureau (CFPB) released a second update to its exam procedures in connection with the new mortgage regulations issued in January 2013, most of which go into effect in January 2014. The update covers Ability-to-Repay/Qualified Mortgages, high-cost mortgages, and appraisals for higher-priced mortgage loans, as well as new amendments related to the escrows rule. The update also covers recent changes to credit card rules. The exam procedures now cover the mortgage origination rules issued through May 29, 2013, and mortgage servicing rules issued through July 10, 2013. As stated in the August 15, 2013 release, the applicable sections of the exam procedure manuals for the Truth in Lending Act (TILA) and the Real Estate Settlement Procedures Act (RESPA) are updated, as follows: “•Require lenders to evaluate a borrower’s ability to pay back the loan: Under the Ability-to-Repay rule, lenders must look at a consumer’s financial information and verify its accuracy. Lenders then must evaluate the information and conclude that the borrower can repay the loan. Lenders may not base their evaluation of a consumer’s ability to repay on teaser rates. They must determine the consumer’s ability to repay both the principal and the interest over the long term − not just during an introductory period when the rate may be lower. Download complete memorandum below 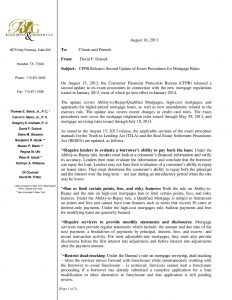