On February 13, 2013, the above referenced press release announced a plan the CFPB will implement over the next year that focuses on the mortgage industry’s compliance with new consumer protections that go into effect in January 2014. To paraphrase an old saying: beware when someone says they are from the government and want to help. 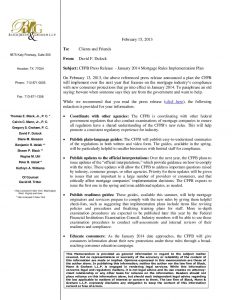