Legal Assistant Sherry Gonzales has varied passions that range from her love of dogs and helping dog rescues, to following the British Royals, travel with family, and support and patriotism for the men and women who serve in our country’s military.

She joined BMG in 2003 in Houston and later moved to El Paso to help her mom when her dad was diagnosed with Alzheimer’s. From her home office, she handles everything from exams to fulfillments. She enjoys new projects and loves challenges. She has never once said no in 18 years. She is one of our client liaisons and is also on the firm’s DEI Committee. 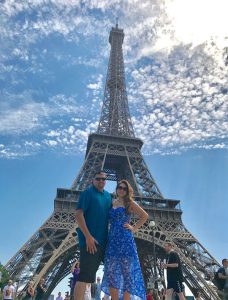 Sherry grew up in a military family. Her dad, James, retired at Ft. Bliss from the Army after serving 22 years. He served 3 tours in Vietnam and was awarded the Purple Heart. Her husband, Patrick, retired at Ft. Bliss from the Army after 23 years of service. Her daughter, Alexis graduated with a degree in Criminal Justice and minor in Forensic Psychology and Aerospace Studies and is currently a Second Lieutenant in the Air Force working in Cyber Security. She is the first female in her family to serve our country. Her son, Aaron, graduated with a degree in Rehabilitation Sciences and is currently pursuing his Ph.D. in Physical Therapy at UTEP and will also serve our country after graduation. 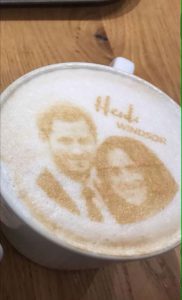 When Sherry is not working, her family loves to travel especially internationally. She has been all over Europe and even climbed Mount Fuji. She fondly recalls a trip to London, Paris (pictured to the left at the Eiffel Tower), Rome and Germany to celebrate milestones — her son and daughter’s graduations and husband’s retirement. As an obsessed Anglophile, she was quite sad when she missed Harry and Meghan’s wedding by a week but since London was still celebrating the nuptials she was over the moon when she ordered a latte and it had both of their faces in the cup! (pictured to the right)

As empty-nesters, she and her husband have opened up their home to two English Bulldogs and two rescues who are part of the family. Sherry is a proud dog mom. There was a city-wide contest for Halloween costumes and her dogs won first place in the animal category. Sherry also loves volunteering with the El Paso Animal Rescue League, as a walker for at the shelter. Sherry and her mom also share caregiving duties and is an advocate for her dad.

“I absolutely love working at Black, Mann & Graham!” Sherry states. “I think what sets Black, Mann & Graham apart is even though we function as a corporation, it has always been very family-oriented. I really can’t say enough about how our leadership cares about all our employees. When I had to move back to El Paso to help my mom, Calvin, Robin and Diane were so supportive. I left Saturday morning and I was up and running on Monday morning. The way the company cares and takes care of their employees always makes me always want to go above and beyond for the company. The most recent example was when most of Texas lost power during the winter storms in February of last year, so the few employees that weren’t affected by the outage were given access into a client’s system. I remember how everyone, including the attorneys, were pulling together and were doing whatever we had to, to get the loans out no matter the hour.”

Sherry – thank you for going the extra mile for your team and our clients! We appreciate you.