Catching Up with Calvin

According to Tom Black, Calvin is the worst retiree he’s ever met. Truth be told, Calvin loves networking and telling people about the great team and unparalleled client service that are the hallmarks of BM&G. As you’re reading this article, chances are, he’s busy nurturing client relationships, cultivating new ones, or practicing a bit of law for the firm.

Calvin’s good reputation has followed him throughout his career, starting with his first legal practice, and later, when he, Tom Black and Greg Graham formed Black, Mann & Graham two decades ago. With years of industry experience, it’s no surprise Calvin receives a number of referrals. When we caught up with him recently, he had met with two Phoenix-based lenders who were referred to the firm, and had just followed up with a new California client referred by an industry friend.

The biggest news for Calvin:  he and his wife are moving to a beach community between Destin and Panama City, Florida. Calvin adds, “I’ll commute back and forth to Houston. The flight between Florida and Houston is only slightly longer than my previous commute from Clear Lake to our Houston offices. Plus, I’m 700 yards from the Gulf, so that’s a pretty nice benefit!”

Calvin, thank you for being part of the BM&G team, and we look forward to your continued collaboration and friendship! 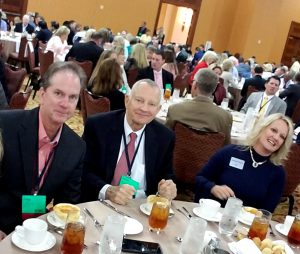