In the October 30, 2014 issue of the Federal Register (79 FR 64518, click here) the Office of the Comptroller of the Currency, the Board of Governors of the Federal Reserve System, the Federal Deposit Insurance Corporation, the Farm Credit Administration, and the National Credit Union Administration (collectively, the Agencies) published a joint proposed rule to amend their regulations regarding loans in special flood hazard areas to implement certain provisions of the Homeowner Flood Insurance Affordability Act of 2014 (HFIAA), which amends some of the changes to the Flood Disaster Protection Act of 1973 (FDPA) mandated by the Biggert-Waters Flood Insurance Reform Act of 2012 (Biggert-Waters). For those wishing to comment on the Agencies’ proposed regulations, follow the instructions for submitting written comments located on pages 64518 and 64519 of the above-cited issue of the Federal Register. Comments must be received by the Agencies no later than December 29, 2014. 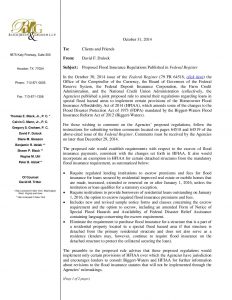