Today six federal regulatory agencies, CFPB, FDIC, FHFA, FRB, NCUA and OCC, issued a proposed rule (click here) to implement minimum requirements to be applied by States in the registration and supervision of appraisal management companies (AMCs). Publication of the proposed rule in the Federal Register is expected shortly. In the meantime, a summary of the proposed rule is contained in the press release also released today by the above agencies. The text of the press release, redacted for brevity, is reprinted below: In accordance with section 1124 of Title XI of the Financial Institution Reform, Recovery, and Enforcement Act of 1989, as added by section 1473 of the Dodd-Frank Wall Street Reform and Consumer Protection Act, the minimum requirements in the proposed rule would apply to states that elect to establish an appraiser certifying and licensing agency with the authority to register and supervise AMCs. The proposed rule would not compel a state to establish an AMC registration and supervision program, and there is no penalty imposed on a state that does not establish a regulatory structure for AMCs. However, an AMC is barred by section 1124 from providing appraisal management services for federally related transactions in a state that has not established such a regulatory structure. 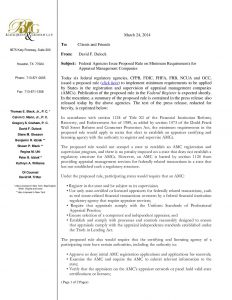