In the March 2, 2021 issue of the Federal Register (86 FR 12079), the Federal Deposit Insurance Corporation (FDIC) adopted a final rule that codifies the Interagency Statement Clarifying the Role of Supervisory Guidance, issued by the Office of the Comptroller of the Currency, Board of Governors of the Federal Reserve System,  National Credit Union Administration, Consumer Financial Protection Bureau, and the FDIC (collectively, the agencies) on September 11, 2018 (2018 Statement). The 2018 Statement states that, unlike a law or regulation, supervisory guidance does not have the force and effect of law and, as such, does not create binding legal obligations.

However, the FDIC has decided to issue a final rule that is specifically addressed to the FDIC and FDIC supervised institutions, rather than the joint version that the five agencies included in their joint 2018 Statement. 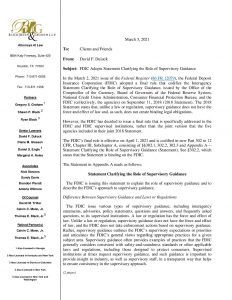