In the September 2, 2016 issue of the Federal Register (81 FR 60609) (click here), the United States Department of the Treasury (“Department”) announced the implementation of final regulations, effective September 2, 2016, defining terms in the Internal Revenue Code that describe the marital status of taxpayers for federal tax purposes. These regulations reflect the United States Supreme Court’s holdings in Obergefell v. Hodges, 135 S. Ct. 2584 (2015) (click here) and United States v. Windsor, 133 S. Ct. 2675 (2013) (click here) as well as the Department’s Revenue Ruling 2013-17 (click here). The language of these definitions is gender neutral and designed to apply equally to same-sex and opposite-sex couples. The Department’s objective was to clarify, for federal tax purposes, the federal law espoused in Obergefell and Windsor.First, the terms “spouse,” “husband” and “wife” are defined in the new regulations as “an individual lawfully married to another individual.” The term “husband and wife” is defined as “two individuals lawfully married to each other.” These definitions are stated in the newly added Section 301.7701-18(a) of 26 CFR Part 301.Second, the Department added regulations specifying the definition of persons who are legally married in Section 301.7701-18(b) of 26 CFR Part 301. A marriage between two individuals is recognized for federal tax purposes if the marriage is recognized by the state, possession or territory of the United States in which the marriage was entered into. A foreign marriage is recognized for federal tax purposes if: 1) two individuals entered into a relationship that was denominated as a marriage under the law of a foreign jurisdiction and 2) the relationship would be recognized as a marriage under the laws of at least one state, possession or territory of the United States. 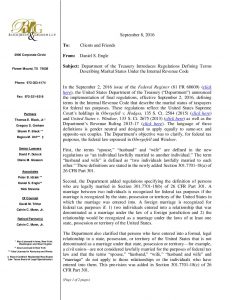